Last Tuesday (18.09.12) a paper was published in PLOS ONE on the metriorhynchid crocodile Dakosaurus, resurrecting the name Plesiosuchus manselii for a large specimen that had been synonymised with Dakosaurus maximus in the late 19th Century (Lydekker 1888). There is not necessarily any reason that this name change would be picked up by popular science, but there are a number of implications made by the authors (Young et al. 2012 a) which made it incredibly interesting. So much so that when given the opportunity to blog on the same subject matter after Lorna Steel's (Young et al. 2012 b) talk at SVPCA Oxford I decided to hold back until the paper came out...

Metriorhynchid crocodiles were a group of thalattosuchian crocodylomorphs with a temporal range (time span) from the Middle Jurassic to the Lower Cretaceous. The group was made up of fully marine crocodiles which were highly specialized for their marine environment. Fossil evidence shows that much like other secondarily marine tetrapods (four legged land animals) [i.e. ichthyosaurs, whales and dolphins] metriorhynchids had tale flukes, like those of sharks. In addition to this clear specialization, the metriorhynchids had hydrofoil-like forelimbs, large salt-glands and lost their armoured plates. These animals filled several niches in the marine environment, they developed numerous cranial and dental morphologies and varied in size greatly. Within the Metriorhynchidae two major radiations are persistently recovered by cladistic analyses; the Metriorhynchinae and the Geosaurinae. The members of the Geosaurinae are usually interpreted as being super-predators and among them, Dakosaurus is interpreted by Young et al. (2012 a) to be macrophagous: "an animal that could feed upon prey items of similar body size" (Young et al. 2012 a). Plesiosuchus is also interpreted to be a macrophagous predator, but differences in anatomy and dental morphology led the authors to suggest a different niche for this creature and to reject Lydekker's (1888) assertions that Plesiosuchus was synonymous with Dakosaurus. This renewed view of diversity is supported by a cladistic analysis (fig. 26 Young et al. 2012 a) [Fig. 1].

By comparing Dakosaurus and Plesiosuchus with modern killer whales and false killer whales, the research team have suggested that the smaller Dakosaurus is a possible suction feeder, or predated upon abrasive prey such as sharks, whereas Plesiosuchus predated upon other large marine reptiles. This interpretation is supported by evidence of the animals relative size, their tooth wear and the maximum gape of their jaws. It seems that the smaller Dakosaurus (~4.5 m) could tear up its prey and was not limited on the size of the prey that it could capture and consume. Distinctive wear patterns on the mesial and distal carinae (front and back cutting edges) of the teeth show that the teeth were shearing, capable of ripping chunks of flesh off their prey. Whereas Plesiosuchus (~6.8 m) was rather more limited by the size of its head, making it more specialized, but nonetheless a large predator sharing affinities with killer whales, which eat other marine mammals. Either way, both would have been fearsome predators of the Late Jurassic seas. However, despite Dakosaurus' incredibly efficient bite, it seems that it may have fallen victim to the larger, veracious Plesiosuchus.

SVPCA Oxford- A review of some amazing palaeontology

It’s nearly been a week since the end of SVPCA Oxford. High time I made good with my promises and wrote the blog post. There was an unbelievable range of talks this year, working through them hierarchically, from jawless lower vertebrates (not Mesozoic) up to mammals, with the archosaur lineage stuffed in the middle. Not only was a large chunk of Vertebrata covered, but it was covered in a huge range of topics; phylogeny, function, morphology, functional morphology, trace-fossils and much more.
Perhaps one of the most pertinent papers for this blog was presented by Paul Barrett and co-authors (Barrett et al. 2012). The title was ‘The earliest known dinosaur?’ a bit of a punch line spoiler, but none the less an informative and entertaining talk ensued. To give a brief summary: the material, from the Triassic of Tanzania has been sat in drawers for years, but a renewed understanding of what it is that makes a dinosaur a dinosaur and a dinosauromorph a dinosauromorph allowed the research team to say that the specimen is definitely one or maybe the other. All joking aside, the specimen is fragmentary, comprising of a partial humerus and some hip and back vertebrae (sacral and dorsal), with some other referred material (originally assigned to separate genera and species) and from this the team established that this animal is either the earliest known dinosaur, or the closest known dinosauromorph to the Dinosauria. They also demonstrated that the bone growth of these specimens was rapid, much like that of dinosaurs, leaving me inclined to consider the material a dinosaur for now. This is great, because now we not only know what the earliest dinosaurs look like, but we can be fairly confident of where they come from and it closes up the ghost lineage on the cladogram. Even with a pinch of salt it certainly says a lot for the robustness of the current archosaur phylogenies, which are being corroborated by new fossil data.
Another impressive piece of work was by Falkingham and Gatesy (2012). The duo modelled track ways to establish the locomotion of small theropod dinosaurs. It sounds like a simple task that won’t return much information right? Well it’s not. They realised that the various morphologies of track ways available in the collections housed at the Beneski museum represented similar animals at different stages of penetration into a substrate. They found a stack which represented the same foot moving all the way through the substrate and tracked landmarks using a computer simulation. Lowe and behold a model of a foot emerged from this process. Not only did they have a foot that looked just like a small theropod’s, but they also had its range of motion, confirming that a small theropod dinosaur does indeed move like a modern bird/avian dinosaur.
In the world of pterosaur research, Dave Unwin presented a piece of research on the ontogenetic (growth) series of Darwinopterus (Unwin et al. 2012). Darwinopterus is a transitional pterosaur, between the derived pterodactyloids and basal forms. When originally described in 2010 (Lü et al. 2010) Darwinopterus was reported as being an example of modular evolution. Now, with the ontogenetic series studied by Unwin and company they have revealed one of the potential mechanisms by which the animals evolved. The suggested mechanism is heterochrony: the process of changing the developmental patterns of an animal, or removing them altogether. In Darwinopterus juveniles it was found that less caudal vertebrae were ossified and that they were shorter than in adults, therefore the short tails of early pterodactyloids such as Pterodactylus are interpreted as neotenous (retaining juvenile characters).
Frankly, there was too much great research to post on in one go, so I’ll briefly report on one more presentation and call it a day. Lorna Steel a curator at the NHM UK presented on behalf of Young and their co-authors (Young et al. 2012) on the metriorhynchid crocodiles Dakosaurus and Plesiosuchus. Metriorhynchids are fully marine crocodiles with tail flukes... pretty cool. Long story short they were huge and Plesiosuchus appears to have been a marine reptile predator, much like modern killer whales. I’m being supremely brief on this one, since it deserves its own post.
Also there is another crocodile paper to be reported on, but this will be reserved for when it is published.
So, all in all it was a great conference and we all have to be appreciative of what the organizers have done for us. They have kept a 60 year tradition going, allowing researchers to present cutting edge science on the clade Vertebrata. 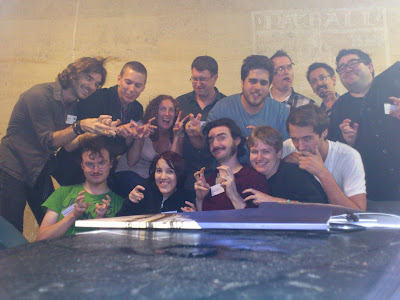 Posted by Steve Vidovic at 14:36 No comments: