Jidapterus: the pterosaur they got upside-down!


The first report of the pterosaur Jidapterus was by Dong, Sun & Wu 2003. Jidapterus is a Chinese pterosaur from the Jiufotang Formation of western Liaoning, making it Aptian in age. It belongs to the taxonomic family Chaoyangopteridae, which is itself in Azhdarchoidea. As an azhdarchoid it has a typically short last wing phalanx (knuckle); a long wing metacarpal (wrist bone) relative to the rest of the wing; a long neck relative to the body; and a large skull, lacking teeth. Initially Jidapterus was not assigned to a family, as Chaoyangopterus had only just been described itself, and it was considered to be a nyctosaur (Wang & Zhou 2003). It wasn’t until Shenzhoupterus Lü, Unwin, Xu & Zhang 2008 was described that the family Chaoyangopteridae was erected. Lü et al. (2008) defined Chaoyangopteridae as being azhdarchoids with an extremely thin premaxilla bounding the nasoantorbital fenestra (the external nares) [NAOF], while the NAOF itself extended back to the jaw joint – among other anatomical features. While the posterior portion of the skull in Jidapterus is poorly preserved, the specimen’s very large/expanded NAOF makes it difficult to argue against its placement in Chaoyangopteridae.
Jidapterus was reconstructed (Dong et al. 2003) as having a skull with a beautifully straight dorsal margin, whilst having a curved occlusal surface (biting surface). However, this is very different to Chaoyangopterus, Shenzhoupterus and Lacusovagus, which represent all of the good skull material within Chaoyangopteridae (see image below).

Unfortunately I am limited by the images available to me and the content of the original paper (i.e. Dong et al. 2003) that I am able to translate, which is why I am now making the disclaimer that this is not incontrovertible fact, but some ideas that suggest the material needs to be revisited. From what I can tell looking at the images in the paper and the information that new fossil discoveries have provided me with, Jidapterus is upside-down!

My reasoning behind it - other than it being inconsistent with other chaoyangopterids - is as follows.
1.       The orbit in azhdarchoids is lower than the dorsal margin of the NAOF.
2.       The curved skull surface of the skull is longer than the straight surface, which would make the lower jaw significantly  shorter than the upper if the original reconstruction is correct.
3.       It appears that part of the jugal (the bone defining the ventral margin of the orbit) is intact on the end of the “dorsal spar of the premaxilla”, which is likely to be the maxilla.
4.       The neck is in articulation and is directed towards the “dorsal surface of the skull”; you would expect it to be directed towards the ventral surface.
So, bearing all that in mind the skull is most likely reconstructed upside-down, and in fact reconstructed very wrongly. I’m pretty sure that a more detailed examination of the material would reveal this and solidify our understanding of chaoyangopterids. See my new reconstruction below.
Morphologically, it appears more similar to Chaoyangopterus and Lacusovagus than Shezhoupterus.

Note: It seems that Lü et al. (2008) and Witton (2008), like myself, considered Jidapterus to have a “straight” occlusal surface to its rostrum, but provide no discussion and only give the reference to the original paper which clearly figures the straight margin as the dorsal process of the premaxilla.

Below is the original photo of the Jidapterus specimen with a scale bar, inferred from the wing phalanx lengths provided by Dong et al. (2003). 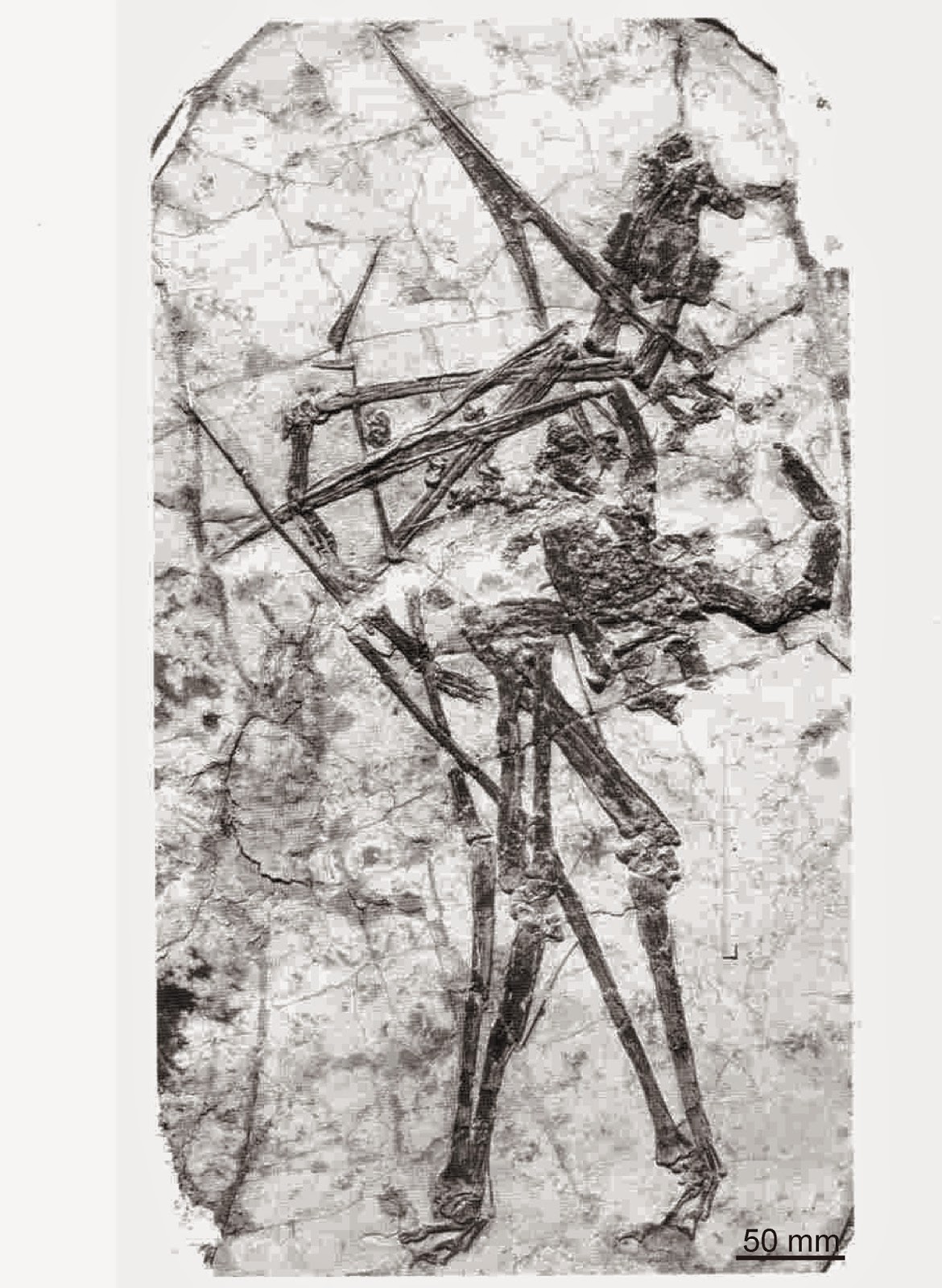