I have to say I didn't see myself wading into the debate about Jurassic World. By the debate I mean science versus artistic licence in the name of entertainment, or as some news reporters have unflatteringly reported it… ‘Nerds’ versus the public. Added to this Jurassic World has made ~$500 million in its opening weekend, $208.8 domestic, beating the Avengers to the top spot. It is now the center of many more debates as reviewers scrutinise it, and they will be discussed in the latter part of this post.

There are many reasons I have made this late entry to the debate;
1. I have only just seen the movie a week into its opening.
2. I decided a long time ago accuracy doesn't matter to me, Jurassic Park and its latest sequel Jurassic World are corny action packed monster movies, not documentaries. However, I had no desire to take opposition with my peers, given that I respect their opinions and they're entitled to them.
3. I wanted to reserve my judgement until I had seen the entire movie, not a theatrical trailer like a certain Marvel Studios top dog (Joss Whedon).
4. I really enjoyed the movie.
5. In my opinion there are elements of each argument that have merit and after taking a back seat for so long, and now having enjoyed the film for what it is I want to air these opinions. This seems the most viable format.

So, a little about the film… A short synopsis and review if you will. [spoiler alert]

Jurassic Park was not a success, even it’s principal funder and visionary Richard Hammond decided not to endorse his own park after a party of independent reviewers fell victim to the greed of men and a nasty pack of ‘Velociraptors’. The park’s creators had spent so long finding out if they could create dinosaurs, they didn't stop to think if they should. The park had been out of bounds for around 12 years with the exception of a couple of unbelievably ridiculous forays back to the park and its neighbouring island. Now Jurassic Park has been re-modelled Jurassic World by Hammond’s successor Simon Masrani and he's “spared no expense”. A sophisticated control centre, new paddocks, a monorail and ‘gyro-spheres’ (seemingly stolen from Rip Hunter) and presumably a much better screening of employees has made the park a much safer place. However, in an attempt to avoid the inevitable slump in visitors and “coupon days” (jp1) the geneticists are making the animals unnaturally large and veracious. The latest attempt to draw in custom, or so we're lead to believe is the new super predator Indominus rex. This super predator is a blend of so many top predators of the Mesozoic I don't care to list them. I. rex is so smart it even manages to outsmart the alpha of the raptor pack Owen Grady (Chris Pratt). With I. rex on the loose horrific scenes unfold, including the release of flocks of pterosaurs Pteranodon and Dimorphodon, causing the best helicopter related death in all cinema history. Around about this time it becomes clear that a military researcher was working subversively behind the scenes to create I. rex  so that he could demonstrate the utility of weaponising dinosaurs. In the end it takes a supreme tag team to put I. rex to rest, which includes Blue the ‘velociraptor’ taking a leaf out of Optimus Prime’s book (Age of Extinction).

My verdict is that this is the sequel Jurassic Park deserved and finally got. It went back to the original genre - there's not much horrific about going into danger with full knowledge of it, that's an adventure movie. In my opinion it was a very enjoyable movie all in all.

I think I've made it very clear that I've enjoyed Jurassic World, and I've not just looked past the scientific inaccuracies, but plainly not cared despite my career path as a palaeontologist. I swallowed the lines referring to inaccuracies very comfortably. In the movie the characters refer to the dinosaurs as monsters, not dinosaurs, presenting understandable inaccuracies due to the missing genome and not only that but they are sensationalised and oversized. Despite this some people, enthusiasts and professional scientists alike have complained about the lack of accuracy and I am sympathetic to their point of view.

When I first heard that feathers weren't adorning the dinosaurs I was myself quite disappointed. However, the disappointment was short lived. I was initially under the impression Jurassic World was going to be a reboot of of Jurassic Park, not another sequel. It makes sense to me that the same genetic procedures and bloodlines, which are only a few generations into a breeding program would continue to lack feathers. I like the continuity. Also, the Jurassic Park franchise is not a showcase for science, but rather entertainment that uses just enough realism to create the believability that keeps audiences in suspense.

The inaccuracies don't end there though. One of my very few criticisms is that the stegosaurs go from a good representation in The Lost World (JP2) to poor. The main reason this disappoints me is the same as why I am okay with the lack of feathers, continuity. There are other examples of old hand JP stars taking a step backwards, but they are only bit parts and detract very little from the end product.

Close to my heart are pterosaurs. No one watching Jurassic World would know that they had a furry covering. Also, the latest theories over quad-launching were all too obviously omitted. Naked, ugly, big bodied Pteranodon had starred in JP3, so I would be a hypocrite of what's good for the dinosaur isn't for the pterosaur, however Dimorphodon  is a new addition to the cast and could have been a bit more realistic for the sake of believability. The pterosaur in JP3 was my least favourite moment of all the films well before I became a palaeontologist, let alone a pterosaur researcher… It's just monstrously unrealistic. Despite these bugbears the pterosaur scene was stunningly tongue in cheek and action packed, much like some scenes in Jurassic Park and mirroring the human interaction and dialogue of Jurassic World star Chris Pratt. So amazingly I was laughing, knee slapping and enjoying the scenes that by all rights and according to some reporters should have had me up in arms (more in a bit)!

For airing similar opinions based on observations from theatrical trailers many enthusiasts took to the blogosphere, tweeted and put up Facebook statuses about their intolerance of the new movie. Likewise, reporters which were also armed with as little knowledge as a trailer cooked up articles regurgitating 140 character tweets from palaeontologist’s reactions to the trailer accompanied by satirical commentary. Gizmodo.com had an article slightly offensively titled “Dinosaur Nerds Are Already Mad At Jurassic World”. Some of the people reporters are calling dinosaur nerds are professional scientists with a great deal of education, passion and experience, this is like us calling a journalist a ‘hate-monger’ for example. This just isn't on.

Yet more social media controversy surrounds the latest in the Jurassic Park franchise, namely sexism. Now this is well beyond the remit of Mesozoic Monsters, but it's worth a mention after discussing the accuracy argument… After all, what's good for the dinosaur is good for the pterosaur. I'm going to approach this debate from a purely logical and academic point of view. A quick google search defines sexism as “prejudice, stereotyping, or discrimination, typically against women, on the basis of sex”, this definition is sexist by its own admission, given that it stereotypes the victims. The sexist argument was first presented by Marvel’s Joss Whedon (wasn't this the guy that had a 16yo girl killing vampires, except those she fell hopelessly in love with?), based on an out of context trailer, but since the movie’s release social media and reports have sunk their T. rex like teeth into it - after the dinosaur nerds got boring. The reason for the Joss’ outraged tweet was that the female lead (NOT I. rex), Claire Dearing is a hard working, stiff female character, juxtaposed to Owen’s free spirit. Later, the characters evolve over a formative journey, Owen becomes a bit more serious and badass while Claire becomes more maternal… And badass. Now this is not prejudice or discrimination, so the complaint must be stereotyping. I guess this stereotyping is a byproduct of the writing process, whereby the writing team had to choose the characteristics of the cast and how they would best function together on screen to draw the viewer into the story and support them in their journey for survival. I fully admit that Claire Dearing and Owen Grady were stereotypes, but were those based on sex? Maybe, this is a formula that's been used in the past and it is often gender specific. However, you’re working with 50/50… Would the same characters work with different genders? They kind of did! Dr Alan Grant at the start of Jurassic Park had no paternal instinct, quite the opposite even, and was so obsessed with his work he couldn't even take criticism from a prepubescent boy that for some reason was in the middle of the badlands. In fact it was only the promise of another 3 years funding that he would even consider going anywhere for a weekend away – by the way if anyone wants to fund my research for 3 years I'll come to your park and I'll endorse it even if your exhibits try to eat me. Guess what, after a formative journey he gains that paternal instinct… And is pretty badass! So, is Jurassic World sexist or have the feminists that criticised it become blind to the fact that they are stereotyping women to be more maternal than men are paternal? This is a can of worms. All said and done, in my opinion it didn't detract from the movie and the five people I went to the cinema (3 women, 3 men including myself) with didn't even notice. However, what was noticed was the catwalk pose Chris Pratt pulled getting in the elevator, which ended in his objectification by the women in our group. One of them even made a remark in the cinema that is too rude for Mesozoic Monsters! This is a total reversal of roles. It's certainly not a Michael Bay moment, but it is arguably objectifying the male role. Nonetheless, it didn't bother me… I'm pretty sure half the men in the audience even had the same reaction as the women Pratt is such a man mountain at the moment. 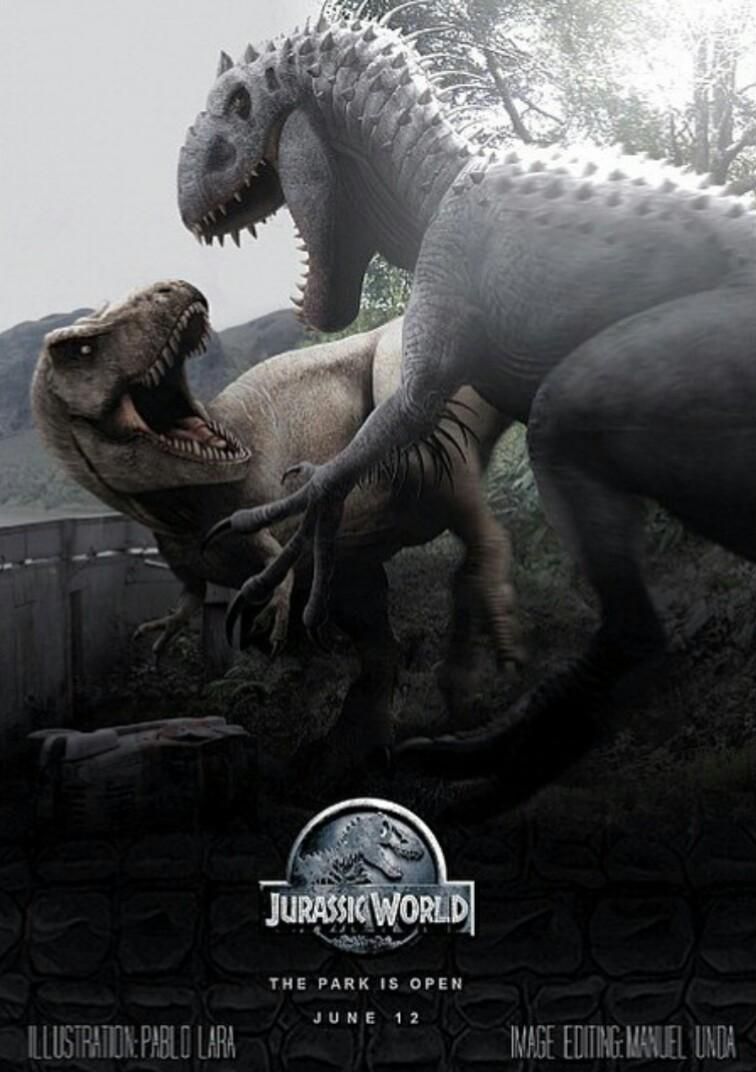 In the time I've been writing this post Jurassic World has become a massive pro-animal rights ambassador, racist, and I'm pretty sure it just killed a puppy. At the end of the day all the media attention on accuracy, sexism and other issues is exactly what you'd expect from a disenfranchised, negative media reacting to the worlds biggest movie sensation. As I said above Jurassic World is the sequel Jurassic Park deserved. It's not just a monster movie, it's a monster of a movie. Entertaining, action packed, and sympathetic to the original. 8.5 out of 10.